I’m doing something a little different with this review because I found these books so similar, and the original inspiration was a little blurb I left on r/Fantasy comparing both of these stories. I read them back-to-back, so a combined review feels appropriate.

I was behind on reading Uprooted, but holy shit was this story good. Like ‘need to go back and start at the beginning even though I just finished’ good. If you think the farm boy/girl saving the world trope is dead, read this book. Uprooted gets rural living. Agnieszka loves her home and her community, and she has no intention of leaving. She actively fights against this the entire book, and even though this book is one of those ones that gets pegged as ‘adult’ and ‘dark’, I thought it was convincingly written for a teenage girl. Seriously. Teen me would’ve DIED reading this. Adult me totally did, too.

Clariel was a book I’ve put off reading for a while, too. This could be an aversion to prequels and their proliferation like ugly fungi. However, Goldenhand convinced me that it was time to catch the fuck up with the Old Kingdom series. Clariel is a major spoiler character in the original trilogy, but I went into the book knowing who she is, but you don’t need to know what Clariel becomes to enjoy the story. The first half of the book was excellent. Clariel wants to flee to Estwael, the giant forest, and live with the borderers, but she’s forced to go to Belesaire and play politics. It was refreshing to read a heroine who hates politics and city life and wants to run away. Clariel was distinct from Nix’s other heroines, too, and the first half of the book is a nice addition to the Old Kingdom series. 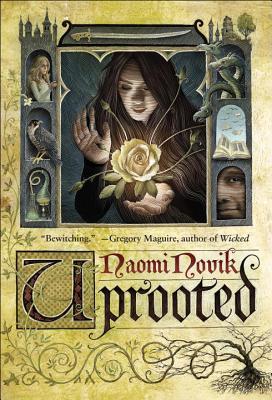 Both Uprooted and Clariel have two similar elements yet a flip-flopped way they deal with them. Both novels involve what I think of as feral woods heroines. Neither Agnieszka nor Clariel want pretty dresses, finery, or status. They don’t ‘play politics’ or try and seduce princes. Their biggest desires are to live in the woods, in the wild, and they both genuinely don’t ‘fit in’ with their respective Grand Fantasy Societies. I really liked this aspect of both heroines because they resist (and ultimately succeed in some capacity) in escaping and not acclimating to proper society. There are so many fantasy novels about characters who have to ultimately accept their place in a greater society, and I really appreciated this pair of stories because both heroines ultimately go against the narrative.

This is about where the similarities to these two stories end. Nature and its wildness plays a major role in both books, too. There are forests–Estwael and the more ominous The Woods–featured in each book. Each heroine has a vastly different relationship to nature. Clariel idealizes Estwael–the Great Forest–and wants to flee Belesaire to live there in semi-seclusion. Agnieszka grew up in a farming community besides The Woods, an evil poisonous thing that holds all kinds of horrors for people, and fears everything about The Woods and what it could do to her, her friends, and her family. Clariel is a story about a forest girl transplanted to a city, and in many ways, Clariel undergoes the transformation of personality that Agnieszka fears. Agnieszka is taken by the Dragon, a nobleman/wizard, and she fears this because no girl he has ever taken returns to their village after their time with him. Uprooted takes place in The Woods and the rural farming communities around where Agnieszka grew up, and Clariel takes place mostly in Belesaire, the capital of The Old Kingdom. Both heroines, however, feel trapped in their respective situations–Clariel as a pawn of the Guilds and Agnieszka as a prisoner of the Dragon.

I would be remiss if I didn’t mention the romantic elements of both stories. It’s fairly clear early on that Agnieszka and the Dragon are going to have a relationship, and this relationship could definitely have been creepy. Like all the plot elements in Uprooted, Agnieszka’s ache and longing permeated this storyline. There are so many snarky, banter-heavy romances that I appreciated how physical and wild the romance between Agneiszka and the Dragon was. Clariel takes a definitively different bend with its romances. Several characters try and force romance on Clariel, but she is thoroughly uninterested. She’s convinced she would make a bad match for anyone and has no interest in marrying for politics or love. I found both of these romances to work well in their respective stories. Clariel’s resistance and Agnieszka’s impulsiveness worked to create interesting yet completely opposite moments.

In both Uprooted and Clariel, there is a second half that is distinct from the first. I was afraid Uprooted would fall to pieces once Agnieszka went to the capitol. The rural setting was so crucial to the first half of this story, and to some degree, the scenes in the capitol were never as compelling as the rest of the story that took place in the farming communities, the Woods, or in the Dragon’s tower. Still, Uprooted survived the transition, but the capital section was the most tedious part of the book for me. Clariel had an initially more promising second half where she flew via Paperwing to the Abhorshen’s house, but it ended up feeling like a retread of some elements of Sabriel and had a weak ending. It’s like Nix got to the ending and didn’t quite have his usual skill for draw-dropping finales. The emotional aspects of Clariel fell flat for me at the end, too. As a feral woods child myself, I appreciated both Clariel and Agnieszka as heroines, but Agnieszka was more authentic the entire time. She gets the outdoors and living in the middle of nowhere I believed Clariel’s need to run away, but not that she really wanted to go back to the woods. There was a little bit of Clariel’s personality that always felt ‘phoned in’ in a way Sabriel’s personality never did. Still, both books are solid reads, although Uprooted was by far my favorite.

Ratings: 4 for Clariel because it’s great but lacked that something that usually elevates Nix’s stories. 5 for Uprooted because it’s an amazingly gripping story the entire time.

4 thoughts on “2-for-1 BOOK REVIEW: Clariel and Uprooted”